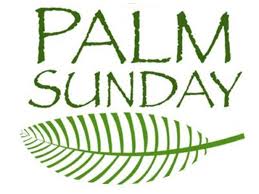 Jesus rides into the royal city of King David accompanied by songs, and branches being pulled down and thrown on the ground before him – protesting the pagan Roman rule within the holy city – the land of God’s people – the Holy Land.

But Jerusalem, is administered, often brutally, by the Roman occupiers. There are no more kings in David’s line. And no more kingship at all. No freedom. No independence. No right to peaceable assembly –

And it is seditious, dangerous, and wildly exciting to see someone riding in on a donkey – the sign of a king entering the city of God – to chants of “Hosanna!”

It is dangerous to shout, “Blessed is he king who comes in the name of the Lord!’ That is highly subversive. And every Roman administrator knew it.

So did every Jew – both those how supported Jesus, and those who opposed him. Some of those who shouted “Hosanna” hoped, even expected, that Jesus would bring political freedom, the end of the Roman occupation and later turned on him when he failed to meet those expectations.

And those who opposed him feared that he might try exactly that – the overthrow of Rome, and fail – and then all Israel would suffer the consequences. The Romans did not tolerate dissent. And the right of Jews to exist as a people free to worship in the Temple, to make sacrifices to God – and not to the emperor – was always at risk.

And yet – the ordinary people came. And Jesus did. And Jesus didn’t stop their cries of enthusiasm. He didn’t deny what they claimed him to be.

This story is our story. Every year the Church all around the world gathers to tell it again. But why do we do it?

We do it for the same reason that Jews gather at the Passover to tell the story of God’s people journeying from slavery to freedom – It is the central story of the Old Testament, reflected in the Psalms, and in the other scriptures – Every event of God bringing new freedom, new life, fresh deliverance is understood in terms of the Exodus.

And so we tell our story – because for Christians, everything centers in, and begins with the Jesus story, and the freedom and new life we insist that God brought to us in Him. It is a kind of global Exodus. And it starts with this protest movement.

For us, it is not just his teaching, his preaching and healing and compassion, but the story of these last days – in which we see most clearly our  universal “Exodus” – a movement from the bondage of slavery to the freedom of forgiveness, from darkness to Light, from death to life.

We sing that what God did for Israel, God has also done for the entire created universe – that God has brought us all out: Jews and Gentiles alike

And that part of the story begins with today.

We sing it and we tell it, and we wave these palms, because what God did in Jesus, God is also doing in us – and has done in the lives of all our ancestors in the faith who also sang this story – and waved palms, and celebrated Jesus’ entrance into Jerusalem, where they – and we – proclaim him king.

It’s listed as an Advent hymn (74) – but listen to these words and see how they fit today’s story as well:

Blest be the King whose coming is in the Name of God!

For him let doors be opened, no hearts against him barred!

Not robed in royal splendor, in power and pomp comes he;

But clad as are the poorest, such his humility.

And yet – we sing about that poor itinerant preacher riding on a colt, (155)

“All glory laud and honor to thee, Redeemer, King!

to whom the lips of children made sweet hosannas ring.

Thou art the King of Israel, thou David’s royal Son,

Who in the Lord’s Name comest, the King and Blessed One. “

And here is why we sing that – because this is where this procession ultimately ends up – with Jesus crowned with thorns, on a cross, where his kingship is declared – and won (156)

“Ride on, ride on in majesty!

Hark! All the tribes “hosanna” cry;

Thy humble beast pursues his road

With palms and scattered garments strewed.

Ride on, ride on in majesty!

In lowly pomp ride on to die;