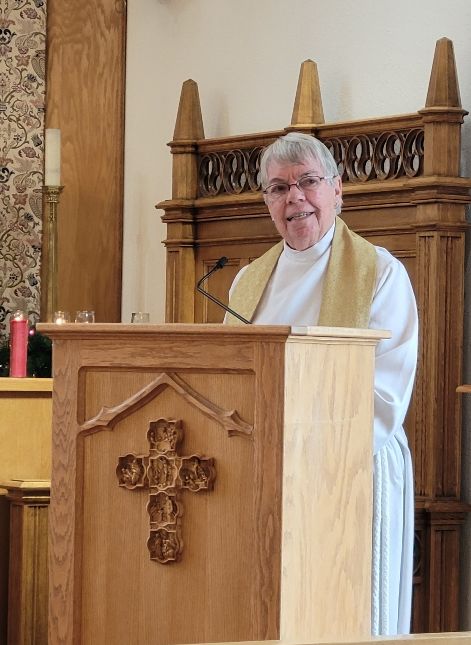 There are three words I want us to notice today – Word, Name, Jesus.

You were probably surprised that I chose two gospel readings for this morning. That’s because we are in an odd space in the church year.
With Christmas on Sunday, and New Year’s Day on the next Sunday, we don’t get the regular “Sunday after Christmas” readings. And yet I can’t bear to let the John reading be overlooked.
At the same time, today’s feast of the Holy Name of Jesus is significant for us, too – remembering the story of Jesus taken to the temple in the eight day to be named and circumcised.
So I had to choose them both.

But they are tightly connected, too.

When we speak of the Word of God, many of us immediately revert to a popular understanding of the phrase, which means, “the Bible.”
And yet, when the word, “Word” was used all through both testaments, that isn’t what it meant at all – It meant, God. It meant, the activity of God. It meant, the power of God doing something.
When God spoke, creation came into being, according to Genesis.
When the Word came to Isaiah or any of the prophets, it meant God had something to accomplish – to speak is to do.
So when John makes that stupendous claim, that, “In the beginning was the Word, and the Word was with God, and the Word was God…and the Word became flesh and lived among us,” he knows exactly what he is saying, and how shocking a statement it would be.

God isn’t supposed to come and be with us – AS ONE OF US.
A God is supposed to be above us, beyond us – different from us. And yet John insists that although it is true that “no one has ever seen God…” the Word was also made flesh – and so in Jesus we do see God.

There could hardly be anything more inexplicable.
There could hardly be any greater evidence that God is FOR us – that God loves us and wants us to know God face to face: bone of our bones, flesh of our flesh, heart of our hearts.
And if that is true, it means we have absolutely nothing to fear in God.
God is love, John also says – and John means it.

The second word I want us to notice is “Name.”
When a boy is circumcised on the eighth day, he is made one with all the Jewish people throughout history, and he is given his name.
You notice, maybe, that we do the same thing at baptism – We incorporate that person into the whole body of believers as an individual with a name.

Partly, of course, a name simply identifies a child. It distinguishes him from all others in the family and beyond it.

But sometimes people change their names, or are given new ones. Sometimes we add second or even third names to a first name.
Most women in western culture have assumed their husband’s name if they marry.
People who change identities – religious, linguistic or gender, accept a new name that better represents them. If you live in a new culture or speak a new language, your name won’t sound the same as it once did.
When women or men entered religious life and became monks or nuns, traditionally they also received a new name.
Name represents identity.

But “name” also represents authority – even power.
Perhaps you have seen old movies where police knock on the door and say, “Open in the name of the Law.”
That announcement of authority meant something – the Law meant something.

If we pray in the name of the Trinity, we mean, really, that we are asking with the authority or in the power of God. It means we take God as our witness that God – and the authority of God – is in our asking.

And so the third word I am interested in right now is, of course, Jesus.
Jesus, as you know, is Joshua – which means “God saves” –
It does not mean, “God condemns,” – or God is displeased,” or even “God is judging” or “God loves distantly.”
It means, God is involved.
God is engaged.
God enters into human history, and into ours, and saves, rescues, redeems the humanity, the people, God created in the first place.
It was God’s pleasure to create us human – like God – capable of friendship with God and with each other, able to love and to be loved.
To do that, God also gave us freedom, so that love would really be love, and that God’s people would not simply be puppets on a cosmic string.

But we humans misuse our freedom all the time, often many times a day, and turn against the wide freedom of generous love – where joy really is found – into selfishness and hurt feelings and half-conscious decisions to keep our distance from others. – and even from God. And then, we become afraid and suspicious of God, too, having re-made him in our own image.

And that is why this feast day matters. We need to remember again and again that the name of the Word made flesh is “God saves.” We need to remember that no matter how often we crash and burn, fall and struggle, God saves us, rescues us, lifts us up, dusts of off and sets our feet back on the path of Love – which is who God is – which is what the Word has always been – and what he Word has always done.

I pray that our new year, whatever challenges it bring us, will find us remembering that the Word was made flesh, that the Word dwells with us, and that the name of that Word made flesh is “God saves” – that God is with us in Love, and that we will rest in that, trust it, rejoice in it.