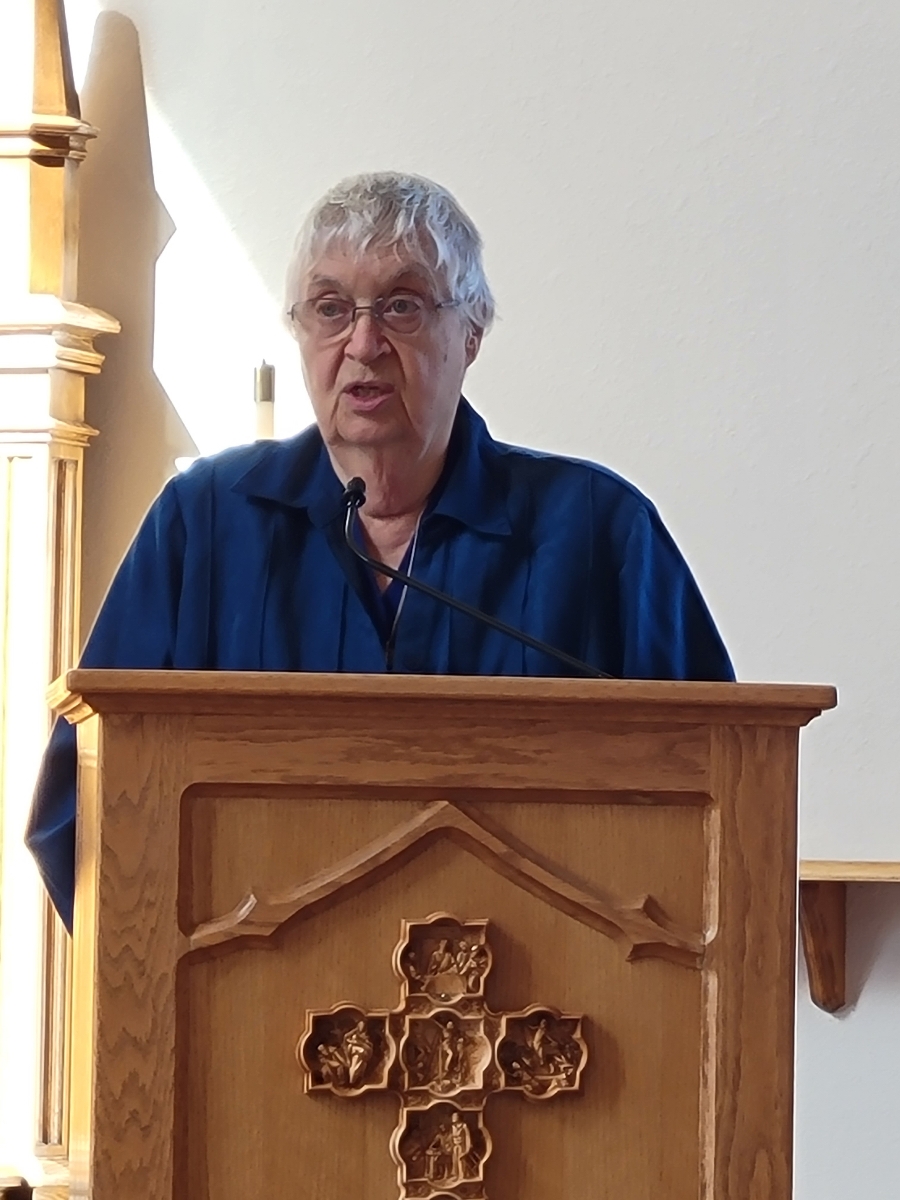 St.Alban’s In the Octave of All Saints Day
May the words of my mouth and the meditations of our hearts be now and always acceptable in your
sight, O Lord, our strength and our redeemer.

Last week we celebrated All Saints’ Day. Lots of people don’t. Even we who do celebrate it have now
made it for all practical purposes a moveable feast, unlike Christmas and Easter, the other two of the
three feasts that Episcopalians were at one time expected to attend without fail every year. All Saints’ is
a feast that is slipping away from us. Might we need to be resisting this trend, and ought we to value a
celebration of the saints more highly than the present age seems to do? Today’s readings, chosen in
awareness that the first Sunday following Nov. 1 st would be all that many parishes would offer in the
way of a celebration of All Saints’ Day, give us an opening to firm up our hold on this feast.

Now normally, the principal service on a major feast day would not be Morning Prayer, but Eucharist.
Today, however, Morning Prayer works to the advantage of our recapture of the feast in one very
important way: in this service we say the Apostles’ Creed. We declare our belief in the communion of
saints. Reciting a creed at all in this day and age frequently involves the sort of wrestling with God our
opening hymn attributes to the saints. If we cannot honestly claim to believe, or even hope and aspire
to believe, what is stated in a creed, then maybe we had better remain silent, or even find another
group to join. Larry says he would rather sing the creed than say it. Creeds can be uncomfortable. This
creed concludes with three pairings which I see as containing paradoxes.
I believe in the Holy Spirit
The Holy catholic church,
The communion of Saints,
The forgiveness of sins,
The resurrection of the body
And the life everlasting.

The Holy Spirit is constantly remaking a Holy catholic church (universal, not limited to Roman or even
liturgical churches) that would otherwise just get more and more and more hidebound. People claiming
the authority of the Holy Spirit are often at odds with others claiming the authority of the Holy catholic
church. The communion of saints implies and requires the forgiveness of sins, but we so easily divide the
world into saints and sinners. A friend quoted St. Augustine on Facebook to say that there is no saint
without a past and no sinner without a future. The truth of this relies on forgiveness. We have a hard
time wrapping our minds around a combination of resurrection of the body and life everlasting. Are
these matters we believe?

The Sadducees in today’s gospel passage did not believe. “They say there is no resurrection.” I’d
venture to say that theirs is the majority position on this question in Western culture today, though for
Christians it would not easily be acknowledged as their (or our) position. I personally have not ever
outright denied the resurrection, but I have lived through seasons of my life when I have asked, “What if
there is no resurrection?” I knew I would still want to remain a Christian, but I was kept permanently
unsettled by the memory of a conversation I had had with my paternal grandfather, one of my hero-
saints, in which he had quoted with approval St Paul, in First Corinthians 15, saying, “If in this life only
we have hope in Christ, we are of all men most to be pitied.” At the time, I had my reservations about
that declaration. My sainted grandfather himself was careful to say that he was “agnostic,” in that he
did not know, but believed, and lived “as if” he knew it to be true.

Science, the body of what we can claim to know, has fostered our drift away from belief in resurrection.
Now in a small way there is within science an eddy, or a small flow in the direction of reinstating our
grounds for belief. We are becoming more aware of the limits of science, aware of the impossibility that
science will ever deliver to us omniscience. Greater and greater levels of confidence, perhaps, regarding
those things capable of being studied by the methods of science, but never absolute certainty, and no
knowledge at all regarding matters science cannot study, like the nature of consciousness, for instance.

As in the case of the Webb telescope, where more and more wondrous worlds are made visible in more
detail, but how they came into existence remains a mystery, so also in the book After, which I regard as
the best example of the eddy of science in the direction of supporting our grounds for belief, we learn
about phenomena that are likely the experiences on which religious convictions are built, yet we cannot
even hope to know our way into the mysteries of life beyond this life while we are in this life.

Jesus would seem to be the exception, or the closest we have to an exception, in that he speaks with
authority about things heavenly. What can we glean from Jesus’ answer to the Sadducees, read in the
light of information from several sources, one of them the book After?

The Sadducees pose their “gotcha” question hoping to demonstrate the extreme awkwardness of a
belief in resurrection which they do not hold. “In the resurrection, whose wife will she be?” This
happens to be a stupid question. If you, like me, like to tell people that there are no stupid questions,
understand that “gotcha” questions can be stupid questions. There are no stupid honest questions. To
the Sadducees, entering the resurrection is like, say, going to another earthly location, but as we read in
canticle 10 this morning, “your thoughts are not my thoughts, says the Lord.”

All three synoptic gospels tell this story of the Sadducees’ confusion, but Mark and Matthew show Jesus
calling them out in bluntly confrontational terms: “Ye err, not knowing the scriptures nor the power of
God.” Luke calls them out more subtly: he fits them into the pattern of the closing verses or Psalm 17.

Deliver me, O Lord, by your hand
From those whose portion in life is this world;

Whose bellies you fill with your treasure,
Who are well supplied with children
And leave their wealth to their little ones.

But at my vindication I shall see your face;
When I awake I shall be satisfied, beholding your likeness.

Jesus said to them, “Those who belong to this age marry and are given in marriage; but those who are
considered worthy of a place in that age and in the resurrection from the dead neither marry nor are
given in marriage.” The concept of worthiness is introduced by Luke, even extreme worthiness as is
indicated by the Greek in this instance, not to exclude most of us from the age to come, but to needle
the Sadducees. They collectively held a place in what Jesus called “this age,” a place of wealth and
privilege and power, controlling the Temple, cooperating with the Roman occupiers, and considering
themselves the worthiest of the worthy. We know how Luke regarded that mind-set. He made it clear in
the Magnificat and in his version of the Beatitudes. Jesus is implying that others will be considered
worthy of a place in “that age and the resurrection from the dead,” not the Sadducees who say there is
no such thing and look down on those Jesus finds worthy.

But back to marriage: In heaven what would be the point? Those in heaven do not produce more
children, as they cannot die and need no heirs. Not for the husband to rule the wife, as they are both
“like angels, children of God,” and each directly connected and related to God. Not for companionship
in adversity, since they have no more adversity. And Heaven supplies all the bliss anyone can
experience. I can imagine this hypothetical family in heaven possibly sharing happy memories they may
have brought with them freely among all of them, but companionable sharing of heaven does not
require marriage. Marriage defends exclusivity. Heaven, as far as I can tell, resists exclusivity.
Marriage, so important to human societies while we are in this perishable body that I regard it as my
calling, has nothing further to contribute to heaven.

Jesus finishes off the Sadducees in Luke’s version in an argument almost word for word the same as that
used by Matthew and Mark, which Luke finds demonstrates the Sadducees error clearly enough by
itself, without further comment. The Sadducees accepted only the first five books of our present Bible
(called the books of Moses, and thought at that time to have been written by Moses) as having the
authority of scripture, so Jesus defeats them using their chosen authority, and using an account of an
experience of dialog with God.

. And the fact that the dead are raised Moses himself showed, in the story about the bush, where
he speaks of the Lord as the God of Abraham, the God of Isaac and the God of Jacob. Now he is God not
of the dead, but of the living; for to him all of them are alive.

All religions grow out of experiences of interaction with mystery. Jesus cinches his argument by
reporting Moses’ experience. The book After is filled with a harvest of forty years spent collecting and
categorizing accounts of experiences many, even most of them, describable as dialogs with God, or
maybe I should say indescribable as such dialogs tend to be. The people who have had these near-death
experiences are none of them especially saintly going in to the experience, and perhaps a few become
saintly as a result of their experiences, but what this book presents is in my view a God and a Heaven far
more generous to us human beings than we are to one another. Dr Bruce Greyson does not casually
toss around words like God and Heaven; their presence here is my interpretation. Having read this
book, I am more comfortable around Jesus’ pronouncements concerning heaven, and more comfortable
reciting the Apostles’ Creed. I find the Communion of Saints to be a society we all belong in, where we
have a great cloud of witnesses, not judging but cheering for us, some of them our hero saints and
others more like nobody special. They are from every tribe, people, language, nation and religion or
philosophy. Their lives may overlap with ours on earth, or not, but their help to us never ends.

I remember trying to tell my medical school mentor, a secular scientist, that she was beloved of God,
and having her ask, how would her life change if she became a believer? She seemed to me to be
outstandingly virtuous already, so I was momentarily stumped. I told her that she would have more
awareness of receiving help. She took that in and pondered it. She has gone on to the next life, where I
like to think she mentors me still.

So, there you have it, my friends, beloved of God, my argument in favor of giving All Saints’ Day back its
honored place in the church year, supported by a set of readings, the gospel insisting on the reality of
life to come, Job and Ephesians encouraging us to be steadfast, for “at the last” we will be vindicated ,
see God face to face, and join the vast throng of saints for whom love of God and neighbor has become
unending bliss.